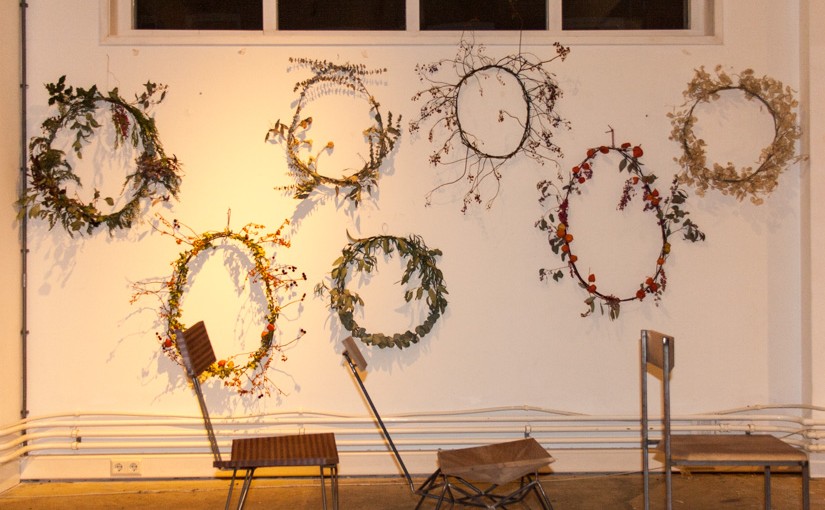 Judith de Vries is an artist who makes beautiful objects of dried flowers and plants. She lives in Amsterdam but is often found on the Veluwe. Her family has always had a cottage there, surrounded by nature. Some trees and shrubs in her garden have been specially selected for their leaves, which she can use in her art.
I met Judith through Instagram and immediately fell in love with her work. She makes collages of dried plants and flowers and places them in frames. But I especially love her flower garlands and wreaths. They are romantic without being dusty or fussy. So when she announced a Christmas wreath workshop I immediately signed up. I asked my mum to come with me and we had a fun and productive afternoon. 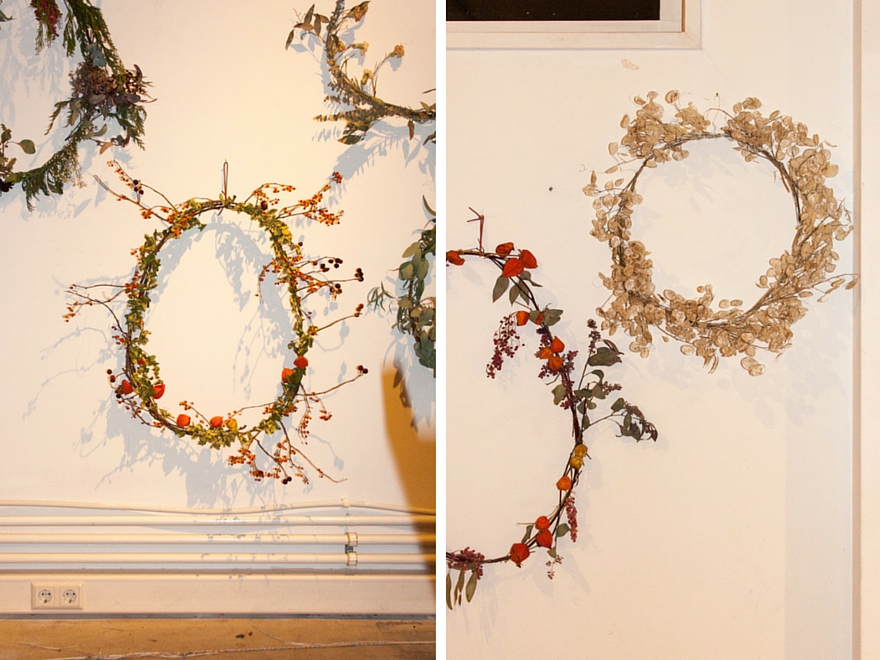 I don’t know how much you know about the Christmas wreath tradition. Why do people hang a wreath on the front door of their homes? In ancient Greece and Rome, wreaths were used to crown victors. If you know your classics, you know what I mean. If you don’t, you might like to read Asterix and the Laurel Wreath. The Romans also exchanged branches of evergreens at New Year’s, wishing each other good health. The evergreens symbolise growth and the continuance of life even throughout though winters. It became the custom to bend these branches into a circle and display them on doors. 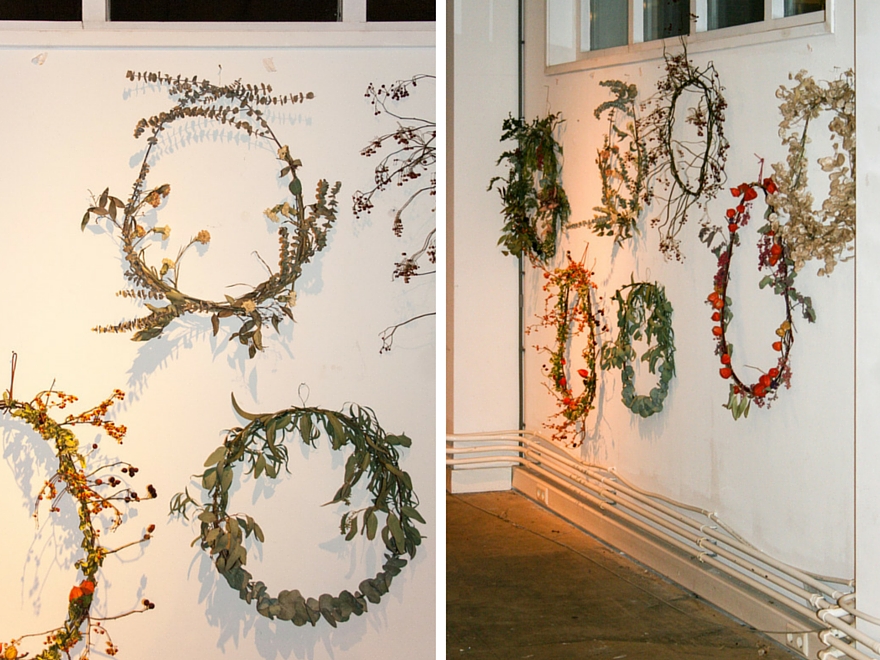 Evergreens have always played an important role in the midwinter celebrations in Northern Europe. Later in history, the wreath became part of Christmas decorations. Evergreens most frequently used were mistletoe, ivy and holly. Mistletoe was said to have magical powers, Obelix’s magic potion includes mistletoe, it was thought to bring good luck and fertility. Holly with its prickly leaves represented the crown of thorns that Jesus wore and the red berries the drops of his blood. Holly has probably given us our traditional green and red colours of Christmas.

Now there is no shortage of green around my house. We have more holly in the garden than you could ever need, lots of rhododendrons and a large Taxus. And with temperatures over 10 ºC, I don’t really feel the harshness of winter.

These days, wreaths are traditionally hung on front doors as a sign of welcome, and to mark the start of the festive season. The modern Christmas wreath can be made from any material, including succulents and pheasant feathers. Alexandra, from The middle-sized garden, wrote a very funny piece called what the wreath on your door says about you. Tell me what’s on your front door, and I tell you who you are.

Judith brought lots of material for us to use. Fresh evergreen branches like different types of eucalyptus, berried ivy, cedar and conifers. To add colour to the wreaths, we could choose from dried flowers like gypsophila, peonies, thistle, Craspedia, Lunaria and Astrantia. Judith uses the winters for drying the plants that she finds in summer. And there were also green and orange physalis, rosehips and berries to choose from.

We all had wired frames to work with. Making a wreath is really not that difficult. Choose some evergreens for the base, I chose these eucalyptus branches with seeds. Lay them on the frame and wrap a piece of wire around the stems. Add another stem of green, overlapping the first one and wrap a piece of wire around the stem. Always work in one direction until you reach the starting point. Add flowers and berries. Dried flowers are difficult to attach to the wreath because they break easily. 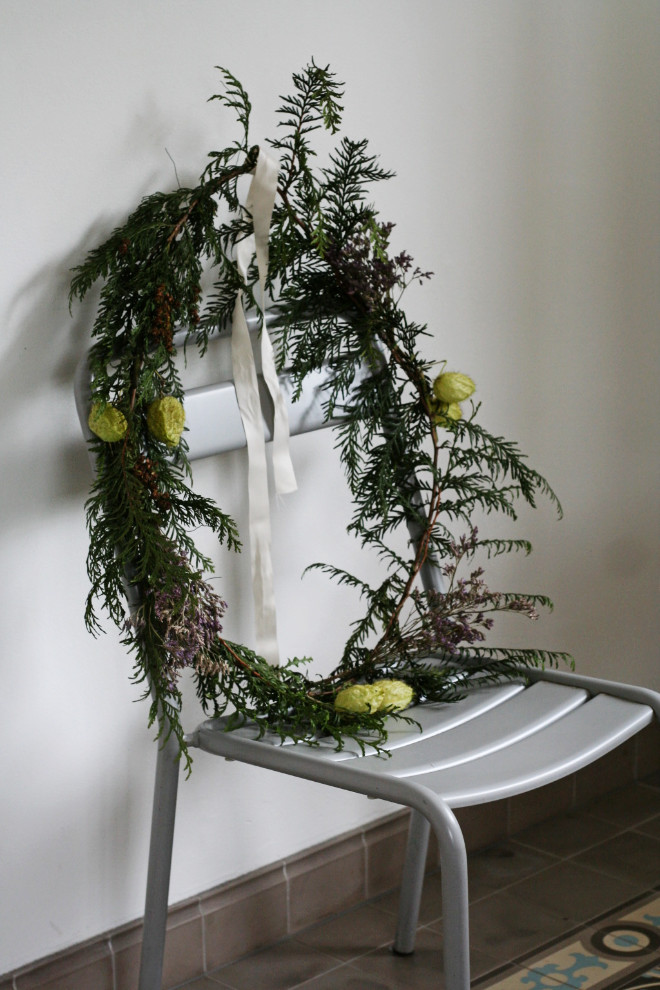 For my second wreath, I tried to work without a frame. I used branches of cedar and attached them to each other with wire. I added green Chinese lanterns and some dried flowers. It’s not perfect, but I like it.

After the workshop, my mother and I went to dinner. We took our wreaths with us in garbage bags. When I got home, after a trip by tram, train and bicycle, I was happy to see my wreaths were still more or less intact. Most of the Astrantia on my first wreath didn’t survive transportation. If you don’t look too close, you won’t notice. Thank you, Judith, for your inspiration. I will definitely experiment with other wreaths.

You can follow Judith on Instagram and Facebook or visit her blog. You can find Judith’s beautiful work at Hutspot, with stores in Amsterdam and Utrecht.

P.S. Apologies for the poor quality pictures, the lighting inside Hutspot was poor.