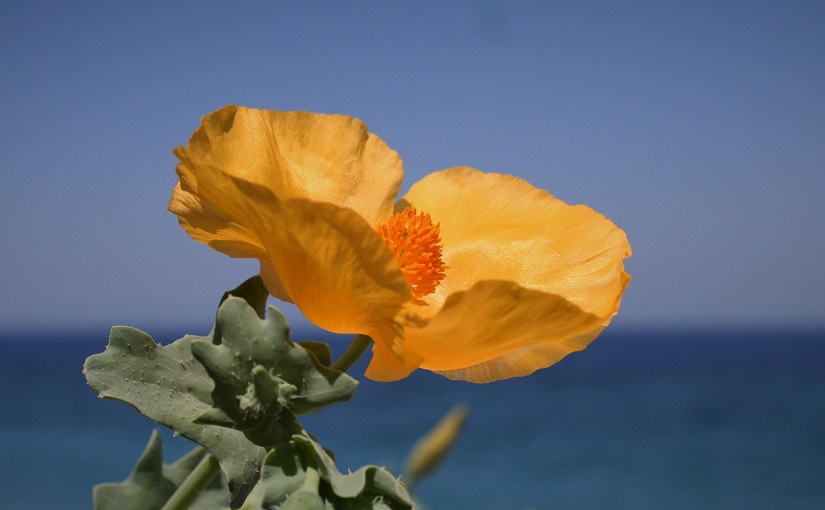 The best thing about a holiday is that you finally get to read all the books that have been piling up on your nightstand. I love to read, but find myself reading less and less. As a mother of four, there is always something to do and these things, or persons, always seem to need my immediate attention.

So when we went on a holiday to Rhodes, the sunshine island in the Aegean sea, I not only packed holiday essentials such as summer dresses, sunglasses, and bikinis, but also a stack of books. My boys need lots of food, and they love to swim. We stayed in a hotel with a swimming pool and a breakfast and dinner buffet with great food, so the basics were covered.

We explored the island’s beautiful beaches, swam in the turquoise blue sea, strolled through the picturesque streets of Rhodes town and ended our days besides the pool, with a book and a beer. I managed to read two books, cover to cover!

I think you know by now that I am slightly obsessed with flowers. So when I spotted ‘The Language of Flowers‘ by Vanessa Diffenbaugh in the library, I just had to read it.

The language of flowers is the story about Victoria Jones and her passion for flowers. Victoria is an angry young woman brought up in the foster care system. She was abandoned by her mother at birth, and her father is never mentioned. When she turns 18 she leaves the group home she hates and ends up on the streets of San Francisco. She has no education, no job, no family, no friends. Victoria has nowhere to go and sleeps in a public park, where she plants a small garden of her own. “My hopes for the future were simple: I wanted to be alone and to be surrounded by flowers.”

After an encounter with a drunk couple she realizes she’s not safe in the park. She finds a job by helping an overworked florist, Renata and rents a room in the apartment of Renata’s sister.

Victoria uses flowers to communicate with others. When she meets a mystery man at the flower market she gives him rhododendron: beware. He gives her mistletoe: I surmount all obstacles. Isn’t that romantic? It’s like a secret language.

Due to Victoria’s talent to read the customers and pick the right flowers for them, people keep coming back to the flower shop asking for her. “Suddenly I knew I wanted to be a florist,” she says. “I wanted to spend my life choosing flowers for perfect strangers.”

Victoria is especially gifted in choosing flowers for couples getting married. Couples will tell her the many hopes they hold for their relationship and also the challenges they face, believing that choosing the right flowers for the wedding will bring good fortune to the marriage.

This is not a new idea, nor an old one. Kate Middleton, when she married Prince William, chose an all white, seasonal bouquet of flowers. In the bridal bouquet was lily-of-the-valley, symbolizing a return to happiness, also included were white hyacinths for constancy and Sweet William for gallantry (and the groom of course). For foliage, myrtle was taken from a descendant of a sprig included in Queen Victoria’s wedding bouquet. Myrtle is said to be the herb of love and is thought to bring good luck.

Victoria creates her own flower dictionary, based on the Victorian language of flowers, also called floriography. Floriography was popular in Europe and America during the 19th century and hundreds of floral dictionaries were printed. Armed with these dictionaries, Victorians often exchanged small “talking bouquets”. The Victorian language of flowers was used to convey romantic expressions: honeysuckle for devotion, aster for patience, and red roses for love. Flowers were used as a code, allowing the sender to express feelings which could not be spoken aloud at that time.

I really enjoyed this book even though the story seemed a little too unrealistic to me. Just a little: an 18-year-old, formerly homeless girl starts her own business (called ‘Message’) providing flowers for weddings which becomes an instant success. But it is a very romantic book, and I always love to learn something new about flowers.

I was a bit shocked though by the fact that some of my favourite flowers have such a negative meaning. I love hydrangea, it is my all time garden favourite, but it is supposed to mean dispassion?

And these beautiful peonies supposedly express anger? Luckily tulips are still safe, they are a declaration of love.

What flowers did you have in your wedding bouquet? And what does it say about your marriage? I would love to hear.

8 thoughts on “The language of flowers: a novel”